This past spring our students were studying several different themes throughout our school. To help students with their understanding of the Holocaust and the Japanese Internment we were honored to have two survivors from each of the events come and speak to our students, the staff, parents, and other community members. We recorded the event so that their voices will not be forgotten.


This is their story.

Our 6th graders were looking at the refugee crisis in Syria and writing about what the Unites States should do to help/not help. We looked at the Jewish refugees from the S.S. St. Louis as an example of refugees being rejected, and the Huguenots as refugees being accepted. We then visited a Syrian refugee camp using Google Expeditions, so that the students could see and feel a little bit about what their life was life before they wrote their argument.

Our 7th and 8th graders were writing about constitutional issues, and they were curious about the new Executive Order 13769 the the president had just issued, and had been blocked by federal judges. We went back and read and explored Executive Order 9066, and then did the same with Executive Order 13769. The students then compared the two orders, and wrote about their constitutionality of them. They investigated what Amendments they may have violated, or what parts of the Constitution supported the thinking behind them. It was a very robust, intelligent, and adult conversation. I was extremely proud about how they handled themselves about such a topic.

The other grades that were involved were our 9th and 10th graders. They looked at the science of hate, and what makes someone act the way they do. They used the info from this event to further their understanding of fear tactics and the role they play in fostering an environment of hate. They then built exhibits that show how marginalized groups in society have had to deal with hate, and what could be done to fight against hate in our society.

A huge thank you goes to the Oregon Nikkei Legacy Center and the Oregon Jewish Museum and Center for Holocaust Education for their help in providing speakers for our event. 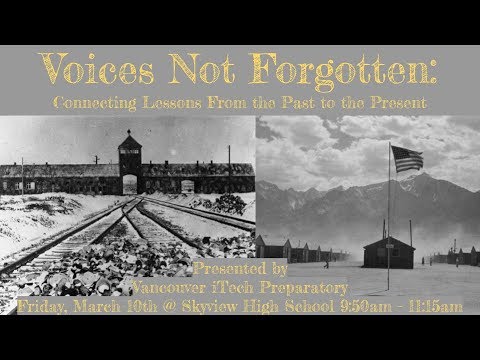